In the Lakota legend of the White Buffalo Calf Woman, a beautiful apparition wearing a white buckskin dress decorated with porcupine quills approaches two men. She carries a pipe bag embroidered with the symbol of the four directions. One man, upon seeing her, expresses a desire to lay with her but the other man advises care and respect due to her sacred nature. However, the greedy man gets exactly what he wants until there was nothing left of him but a pile of bones in the grass. The White Buffalo Calf Woman explains to the remaining man that what his lustful companion had yearned for was only her beauty. His demise lay in his unwillingness to know her spirit.

My grandmother would sit before the fire in our house which backed up to the Wekiwa state park in Apopka Florida and tell me and my twin sister this story over and over. The purpose of this story has not always remained clear. When we asked her, finally, why she was telling us this story once more she explained: There are many interpretations and uses of the story, she said, but you should learn that a man should show respect for a woman’s spirit. The Buffalo Calf Woman gives us strength even though she came to the Lakota.

And then my grandmother laid down upon the couch because she liked to be near the stove where she makes little corn cakes for us, cakes she feeds us with squash juice and honey when we come home from school. Often my grandmother reminds us of our heritage: We are descended from a relative of Georgia Rose, a full Cherokee, who married a Seminole.

In our room at night, we talk about this story Grandma tells us and try to discern what it must be saying. No man seems to care about us. There are many men who have said they want to lay with us and we are only fifteen. There are many guys our age who want this and older guys too and when they admit it to themselves they want not just one of us but both at the same time. A couple of men have tried to pimp us out. They are greedy, like the lustful man in the story, and they do not know what is inside, our spirit. They want what they want.

Still our grandmother has taught us a lot and we try to listen to her. My mother married a white man much to her disappointment and now that my mother has cancer, Father is gone, gone, off to Texas without a penny left to give his dying squaw, to save her life.

We have crosses and dreamcatchers, Native American dances and hip hop, prom and religious ceremonies, native costumes and Juicy Couture. Grandmother holds it all together and yet she grows weaker. “You girls are going to have to handle the guns and take care of this place. You are going to have to drive and share the car and take care of your mother. As for your father, girls, I will have to say: It is expected.” She lay her head down at last as if that final confession had taken her last breath.

That night, my sister and I built a fire in the fire pit. We put on our ceremonial dresses and braided our hair and interwove feathers. We put paint on our faces and burnt bundles of sage. We had done this many times, when we were bored, lonely, when grandmother had to go to the hospital, when our mother was diagnosed, when our father left us alone and our mother wouldn’t get off the couch for days. It was what we knew, this turning slow circles in the way we had been taught, but slower. We danced a man’s dance but in a woman’s way. We were turning and we were thinking through our plan. Here was the story of the hunt, the way the weapons were prepared, the way we were to feed our family, this is how it would happen, how the buck would be approached, how it would die and we would live. We had talked over it in the moonlight shining through our bedroom window, the feathers in our dream catchers caught lightly by air blowing through the vent.

“Come to Wekiwa State Park,” we said to the men in online exchanges. “Walk to Sand Lake and sit there and wait until the park closes. We will meet you at midnight. We will build a fire and make you feel good.”

That was all we said. Well, we made arrangements for letting them know what they were getting and for how much. We found the men to be pliant, but not all of them followed through, and some of them, when they followed through, would not drink with us and so it wasn’t safe to continue and we disappeared into the woods, leaving them stranded. But somehow, we would make them pay, pay for what they are doing to us, what they are doing to my mother through my father and his white man Porsche while my mother is left with the cost of radiation, chemo, surgery.

We got better at it. Drinking became part of the deal. No man liked being called a woman and so we goaded them: Drink, drink, we said. And then we slipped Mama’s oxy, powdered, into their beers. And then we danced, turning, slowly around the fire, circling, ever closer, putting the buck in our sites. We kissed each other and he began to drink. We touched each other and started taking off each other’s clothes. Drink, drink, we said. Yet when these men stood to touch us, they would lurch back and collapse. It was the drug, taking effect. We would wait until they were immobile and then we dressed. The fallen man would keep long enough for us to raid his wallet and run away, through the moonlight, through the woods once inhabited by natives who fed on alligator, through the fields now deserted.

On these nights, a woman rose up out of the grasses. Her hair was white and adorned with feathers and she wore a white calf skin dress. She was mother to us every night and we made our escape. 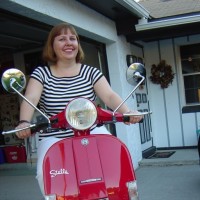 Chefwind
Be A Healthy Senior

Bringing you information tips and advice to help you in the aging process.

A Dream In The Making

On The Subject of Horror

Thoughts from the deep dark

Serotonin publishes poetry and prose on mental illness and suicide prevention. Trigger warning: themes of trauma, abuse, and self-harm throughout.

"The universe is made of stories, not atoms."